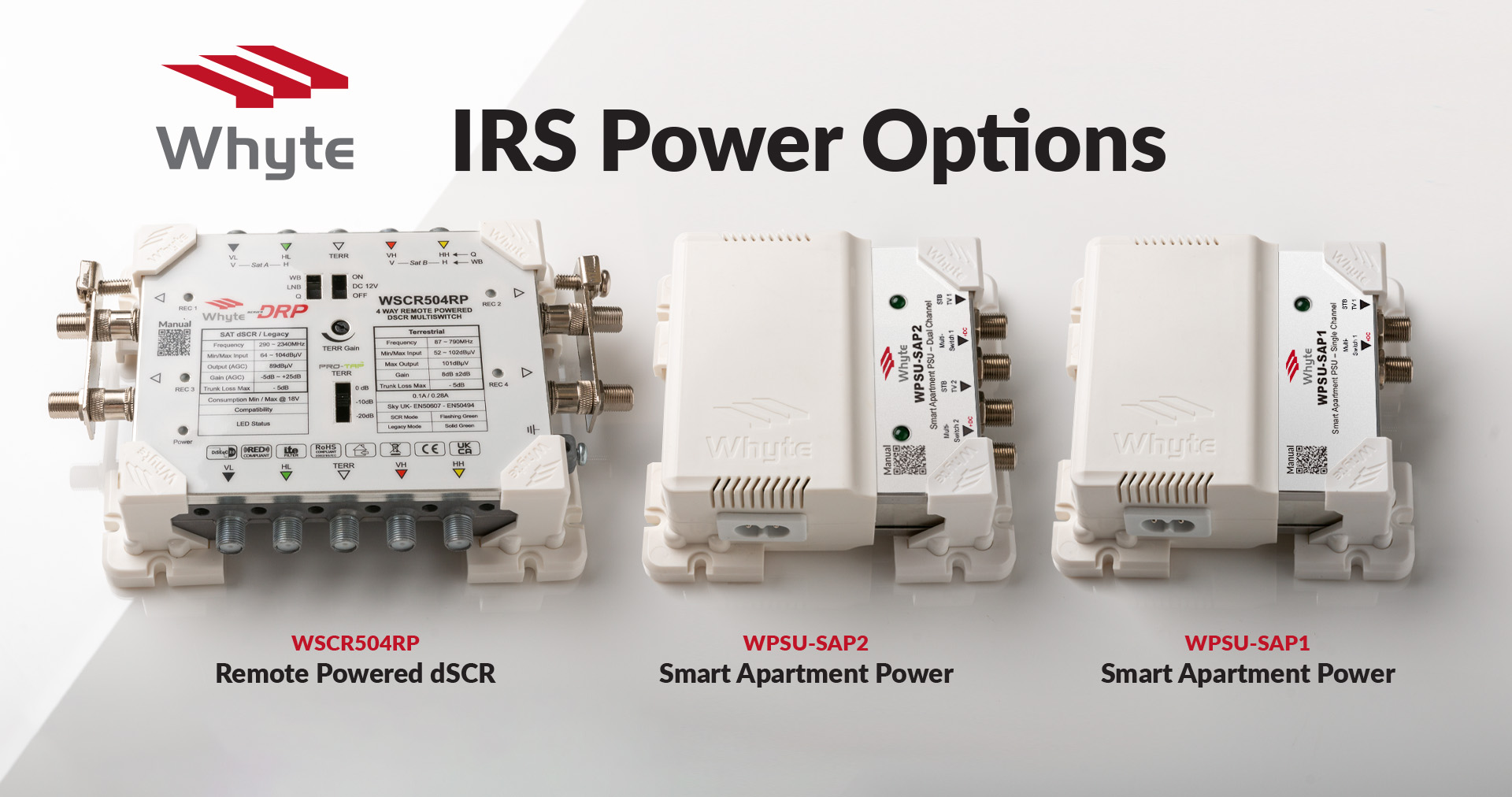 Remote powered IRS Systems are installed in buildings where there is no communal power (also known as landlords supply).  Historically the required power was derived from the STB’s (Set Top Box) via the subscriber cable within the apartments. These legacy STB’s had adequate power to feed the IRS System, but problems occurred whenever the STB’s were all switched off. This meant that residents who did not have an STB, but instead relied on Terrestrial TV would lose their signal. Eventually solar panels with battery backup were introduced to power the Terrestrial side of the IRS System. This went some way towards resolving the issue, but the UK weather can be somewhat unreliable, and batteries would suffer in the extreme cold of winter leading to unreliable performance as well as high maintenance costs.

With the introduction of dSCR these IRS Systems were upgraded by replacing the remote powered legacy Multiswitches with dSCR Multiswitches. As dSCR Multiswitches consume a great deal more power than Legacy Multiswitches the STB’s could no longer be relied upon to provide this. This resulted in the introduction of the Apartment Power Supply Unit (PSU) which was fitted between the STB and the subscriber cable. Ideally these Apartment PSU’s would be fitted to all apartments to ensure that the TERR service was reliable and did not depend on a friendly neighbour keeping their STB switched on!

However, this presents a backwards compatibility problem because Apartment PSU’s are not compatible with Legacy STB’s which switch between 14 and 18 Volts for the purpose of switching between Vertical and Horizontal polarities.  Therefore, a new tenant who is a Legacy STB owner would trigger a service call as they would only receive half of the available satellite transponders. What’s needed is a smart power supply.

The Whyte WPSU-SAP1 (Single Channel) and WPSU-SAP2 (Dual Channel) Smart Apartment Power Supply intelligently monitors the STB voltages and allows 22kHz/DiSEqC tone to pass unhindered. These power supplies deliver the required voltage and tone while taking the load away from the STB so that any STB will operate seamlessly no matter what kind STB is in the apartment (Sky Q or Legacy). In addition, Terrestrial, DAB and FM signals are also passed. Even when the STB is in standby or has no voltage output, the Whyte Smart Apartment PSU delivers voltage to the IRS maintaining Terrestrial functionality. All Whyte PSUs including the SAPs are derated so that the stated power is rated for continuous long-term reliable use.

The Whyte WSCR504RP remote powered 4-way dSCR Multiswitch is designed specifically for installations where no landlords power is available. The WSCR504RP retains all the features and performance of the Series D like PRO-TAP terrestrial attenuation, TRUNK EQ, manual Terrestrial Gain Control. The WSCR504RP is the perfect partner for the Whyte WPSU-SAP1 or WPSU-SAP2 Smart Apartment Power supply. For larger remote power systems, the WSCR504RP can be easily cascaded.